Editor’s Note: There are moments in history when something’s time has come. According to author and educator Tim Munkeby, that time is now for Universal Pre-K Education. As defined by the Alliance for Early Success, Universal Pre-K (also known as “preschool for all”) is a policy framework that gives all families with preschool-aged children the opportunity to voluntarily enroll their child in a publicly-funded pre-kindergarten care and education program in a state or community.

Desmond Tutu, the late South African bishop and human rights activist, once wrote: “There comes a point where we need to stop just pulling people out of the river. We need to go upstream and find out why they’re falling in.” Munkeby’s newest novel, The Advocate, goes upstream. 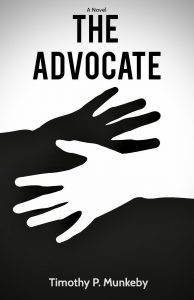 “Why are people ‘falling in’?” Munkeby asks. “Why is society plagued with so much hate, so much violence, and so many mass shootings? Why are we facing so much mental illness, so many economic disparities, and so much divisiveness?” Munkeby believes one of the primary reasons is a lack of early education.

Munkeby explains, “Would you like to go somewhere, like school, every day where you’re made to feel stupid? Where you start out behind and only fall further and further behind? When the future seems futile, pointless, hopeless? Might you not ‘fall in’—or in this case—drop out?” He points to statistics showing that 80 percent of all males in federal or state prisons don’t have a high school diploma.

According to the Educator Policy Innovation Center (EPIC), “There is little question about the value of providing high-quality pre-K education for children. The growing body of research is conclusive: High-quality pre-K provides dramatic and lifelong benefits to children and solid economic and social benefits to the communities in which they live. Children who participate in pre-K see educational advantages right from the beginning—quantifiable improvements in reading and math scores to be sure—but also more fundamental and lasting effects such as higher high school graduation rates, lower rates of teen pregnancy, higher income levels, and more stability in their family lives.

“The time is here, now,” says Munkeby, about pre-K education. “But, in St. Paul, Minnesota, for example, there was a referendum recently to instill Universal Pre-K and it failed to pass despite the fact the benefits of it are indisputable.”

Springboarding off his support for Universal Pre-K, Munkeby’s The Advocate tells the story of a middle-class widower, Ryan, who volunteers to “advocate” for a single mother, Wanda, and her baby son, Marshawn. Ryan’s task is to ensure “Marsh” is read to, and prepared for school. However, even from the start things don’t go smoothly.

Munkeby believes his novel can make a major difference in education simply by “helping people put faces on these kids who fail, due to no fault of their own.”

The Reporters Inc. is pleased to present these exclusive excerpts from The Advocate.

I assumed she—Wanda, I was told—would be defensive. Why wouldn’t she be? I’d be.

We just stood there for an awkward moment, facing each other. I can’t imagine what my expression might have looked like. Terror, maybe, like at the top of a rollercoaster, with no idea where I was going except into free-fall.

When Billy and Rose had asked what the objective of the program was, I’d explained that I’d been told too many kids get to kindergarten angry and feeling like they don’t belong, and are already predisposed to fail. They agreed that was bullshit. Somethin’s gotta change that. I told them it’s been proven that it’s cheaper to educate properly, to eradicate how we fail our children, than to deal with violence and subsequent incarceration later…I told them the primary focus of the education of these “students,” prior to kindergarten and with the involvement of the advocate, was to read to them, to identify learning disabilities, and to specifically deal with “character” issues such as kindness, empathy, sharing, and the like.

Wanda, though, as well as Marshawn, so far, was not, as you’re aware, as receptive to me as I had hoped. Marshawn’s eyes would rivet on mine, a look almost like a threat…stare right through me it seemed. Wanda would occasionally toss me a wan smile but rarely looked at me directly and said nothing in the car on the way to the meeting. I didn’t force it. Kept quiet. Figured it would work itself out if I didn’t say something stupid and blow it.

As the Monday and Thursday meetings passed, Wanda had gradually become, if not warm, at least accepting. She didn’t talk to me much, which annoyed me, because at the meetings she talked cheerfully to everyone, including the other advocates. And she was funny, I guess….except she started giving me crap. Like one time when Ona had come to the meeting without her boyfriend, Jake, we had ended up talking quite a bit. And when Ona had walked away, Wanda snuck up behind me and noticed me noticing Ona’s sweet behind sidling away; she knocked me on the shoulder, not terribly gently, and said: “Whatcha lookin at? You better watchit. Jake could kick yer skinny ass from here to New Orleans.”

I had laughed and asked: “Why New Orleans?”

She answered: “Why not? Ain’t that far nuff?”

Ryan clashes with the director and is removed from the program.

But as spring rolled into summer, what really started to bother me was that Marsh would be starting kindergarten in the fall. Was he going to be ready? I had been sure of it. And in his class would be Latrell and his neighborhood chums.

There were at least a couple kids in the daycare that would also be in his class. One was Ona’s daughter, Remmi. Remmi was very shy and captivated us all in daycare with her mother’s remarkable smile. Although taller than the other kids, she was quite delicate and appeared to be vulnerable. Marsh and Remmi got along well, and Marsh was often her protector.

Another in the class would be Jay White Cloud’s son, Arnie. Arnie was painfully passive. He seemed wary with almost everyone except Marsh. Arnie and Marsh had become friends. Being a Native American, how would he fit in with Latree and Marsh’s neighborhood kids? I hoped his size would deter any bullying, but as soon as they found out how gentle he was, would he become a target? And how would all this be coming down for Marshawn in school caught in the middle?

Why couldn’t all of Marsh’s neighborhood buddies be in our program or one like it? The more I thought about this, the more nuts I got.

Ryan discovers that advocating for Wanda and Marshawn has not only been good for them, but for him as well.

When I hung up, I realized how much I had changed. I mean, I was thinking I wanted to invite all four of these women–Ona, Rose, Lee, and Wanda–over for dinner. And it made me laugh wondering what the neighbors might think. Lee, alone, would scare the crap out of them. Before Wanda and Marshawn, who would have thought that my four favorite people in the world right now, aside from my family and old friends, were a collection of Black women?

After a little mixing, we all sat at tables circling the room, each child with his or her parent or parents and advocate for the readings. I was really impressed. The kids did well, all with minimal prompting. When it got to Marsh, who was last, he held up the book, showing the cover, and looked around the room. He waited so long, we all, me especially, started to get nervous. I was just about to do a little prompting myself, when Wanda stopped me. Marsh, looking so serious, started slowly, still holding up the book, looking out at everybody, and confidently picked up momentum. The kid had memorized the verse! I looked at Wanda and choked up. He got all the words right, and more. When he was done, everyone was silent for a moment.

The following Tuesday school would start. The time was here, now. It had been quite the journey. A pilgrimage. I couldn’t help but feel–well, a lot of — dread, and a lot of excitement.

Both of which, it would turn out, were warranted.

The Advocate is available for purchase from Amazon, Barnes and Noble, and straight from the publisher at https://www.kirkhousepublishers.com/timothymunkeby. Tim Munkeby is a member of The Reporters Inc. Advisory Committee, a former junior and senior high school English and creative writing teacher, and the founder of Munkeby Financial Inc., a financial services firm in the Minneapolis, Minnesota area. In addition to The Advocate, he’s written three other books, all available at www.timmunkeby.com.

No one has commented on "The Advocate"
Feel free to join the conversation and leave a comment as well.