Zach thought he was a sponge and stayed in a shower for several hours, terrified that if he dried off, he would die.

Evie squatted on top of a low bookshelf for the duration of a party, paralyzed with fear because (we would later learn) she thought the un-popped popcorn kernels on the floor were alive and after her.

Nearly 40 years ago, in the early 1980s, I tried to soothe and reassure these college friends through terrifying trips on psilocybin mushrooms—also known as “magic mushrooms.”

Granted, it’s likely Zach and Evie consumed edible mushrooms laced with PCP (a dangerous and cheap manufactured hallucinogenic commonly used in those days by drug dealers to imitate other drugs) instead of real psilocybin mushrooms, which also cause hallucinogenic experiences but grow naturally and have been shown by research to be much safer.

However, according to studies on psilocybin—as well as some mushroom users in my own social circle—it’s not uncommon for “shrooms” to cause anxiety-filled or highly emotional trips if a person has underlying negative emotions going into the experience, or is in an environment that is overstimulating.

After helping my college pals get through those crazy experiences, my view on psilocybin mushrooms went from “not interested,” to “Yikes! I wouldn’t try them if you paid me.”

These days, however, the abundance of data coming from studies at top ranked institutions that demonstrate the mental health benefits of shrooms, along with accounts from friends of their positive experiences with them, has led me to a complete turn-around in my perceptions of shrooms. Not only would I consider trying them as a means of alleviating the mild END_OF_DOCUMENT_TOKEN_TO_BE_REPLACED

Editor’s Note: This is the latest installment of “The Transchick Chronicles,” an on-going series of essays written by newly-out transgender journalist Stephanie Haskins, as she documents her transition. Scroll to the bottom for links to her previous entries.

It’s been a month since my vaginoplasty, and only now am I starting to have little shivers of joy zap through my body.

My God! I did it. I actually fucking did it. I no longer have any evidence on my body that I was ever a male. (And yes, I do think in italics.)

But what if I almost died during the procedure, or something like that?

Sorta like what happened when I came down with Covid BA.5—the latest variant—while I was recovering from my vaginoplasty. When there were actually several days that I didn’t think I’d wake up. Like when I simply went to sleep a few nights knowing that if I didn’t make it to morning that my spirit would no longer be angry. Or sad. 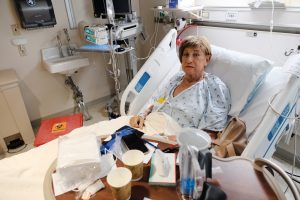 Stephanie “The Transchick” in her hospital bed, awaiting surgery on June 10, 2022. Photos by Wayne Freedman