Editor’s Note: Since The Reporters Inc. published this article, the following has also happened:

?* For the second time in a year, a Spanish matador was killed during a bullfight. Ivan Fandino tripped on his cape in a southwestern France bullring and was savagely gored to death.

?* During the 2017 Pamplona ?Running of the Bulls? in early July, no one died?but seven people were gored and seriously injured during the nine-day event.

?* In mid-July, Spain’s Balearic Islands voted to outlaw killing bulls in the ring, and made it also illegal for the animals to endure physical or psychological damage. (Traditionally, matadors try to drive a sword between the bulls? shoulder blades and through the heart, to end each fight.) Days later, Spanish government leaders launched an appeal to overturn the law.

?* And on July 29, onlookers said a bull appeared to ?commit suicide? at a festival in Valencia after its horns were set on fire while it was tied to a post. When the bull was let loose, it first ran away but then turned and dashed full speed ahead into the post, collapsing and dying almost instantly.

One year ago, in early July 2016, fighting bulls gored 11 people as thousands darted down a half-mile course of narrow, cobbled streets in Pamplona. It was the city’s annual nine-day ?running of the bulls? event, a fiesta that dates back to medieval times and attracts participants from around the planet.

All 11 of the 2016 victims suffered serious injuries while countless others endured minor ones as the bulls (as they do every year) trampled and knocked over runners during the San Fermin Festival, which was broadcast live on Spanish television.

Over the past century, 15 people have died from gorings during Pamplona?s running of the bulls. Every year, between 50 and 100 people are injured. Also last year: in the southeastern Spanish village of Pedreguer near Valencia, a 28-year-old man was killed during another bull run. A bull?s horn pierced his lung and heart as he was trying to help a fellow runner during the event.

The running of the bulls ends when the bulls are waved in to a city bullring, where they?re ultimately killed by professional toreros (bullfighters) in an afternoon corrida?(bullfight).? Last year, 29-year-old Victor Barrio, one of Spain’s top bullfighters and a household name in the country, was gored to death in the ring in the town of Teruel, during a fight that was also aired on live TV. Spectators, including Barrio?s wife, watched in horror as a bull rammed a horn through Barrio?s chest. He was the first Spanish bullfighter to die in the ring since 1985 (though dozens of others, and their assistants, are injured every year). According to The Arena: The World of the Spanish Bullfight, a total of 533 bullfighters have been killed in Spain since 1700.

As you might imagine, the running of the bulls and tauromaquia (bullfighting) have their detractors?many of them. PETA (People for the Ethical Treatment of Animals) calls the running of the bulls archaic and torturous. The group says the bulls break bones as they crash into walls, slipping down Pamplona?s streets. The League Against Cruel Sports says the bulls are ?frightened with gun shots, electrocuted with cattle prods and kicked and hit by jeering spectators.?

And a recent PETA press release about bullfighting stated, ?Imagine how the bulls must feel at the end of a bullfight when a sword is plunged into their necks, backs and bodies again and again until blood is pouring from their wounds and mouth. They?re terrified, they?re in excruciating pain and they don’t want to die. But they can’t run away. After falling to the ground from exhaustion and massive blood loss, they can only watch and wait as another knife rips into their spinal cord with the aim of killing them. Often, they?re still alive but paralyzed as they?re dragged from the ring by their horns and their tail and ears are cut off to be given to the matador. This is the experience of thousands of bulls every year, and there is simply no excuse for this suffering.? 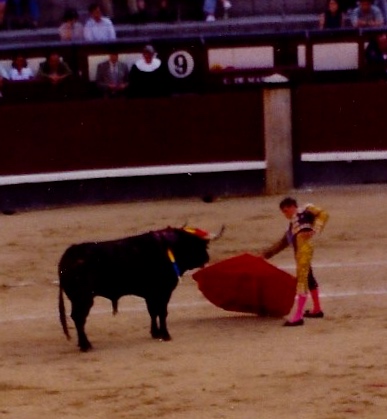 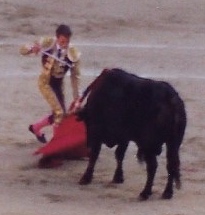 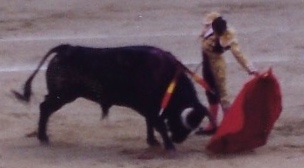 Images from a bullfight in Madrid,?Spain 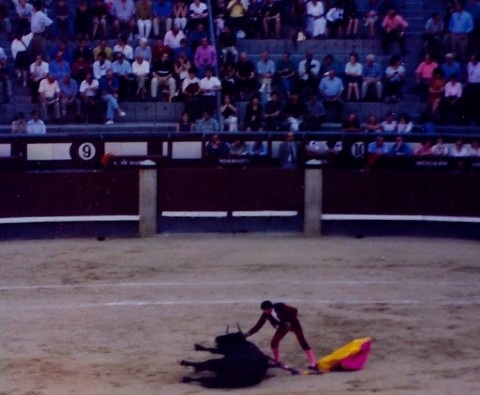 I am a proud Spaniard, born and raised in Spain (and still live here today), and although I am not a bullfight supporter at all, the advent of this year’s annual Pamplona event (July 6-15) got me thinking about this controversial tradition.

Many people reject bullfighting without ever having seen one; they seem to think they know they?re not going to like it. Is it art? Is it sport? Is it savagery? It’s difficult to deal with bullfighting antipathy when it comes from those outside Spain; those from other cultures or countries who judge our customs or traditions without knowing their history aren’t greeted with much respect. For example, it’s difficult for us to understand why some people from the United States carry guns, why some in Muslim cultures cover their faces and bodies, or why some people in Asia eat dogs and rats. But one simply cannot judge other countries? way of life without knowing all the facts.

The love of bullfighting for a lot of people in Spain (as well as many in the south of France, Central America and South America) is related to the notion of human domination over animals, as a way to show courage. The bull is 600 pounds of muscle, adorned with two sharp and pointed horns. They believe the bullfighter has only his brain and a cloth (and yes, a sword, of course) to battle it. One also has to consider the traditional southern European obsession with beauty. The bull is an amazingly beautiful animal, strong and powerful, and the way he and the bullfighter both move around the bullring creates a majestic aesthetic. Tradition in old Europe is also important; bullfighting is one notable way that helps us stand out from other cultures. In fact, during the military dictatorship era of the Francisco Franco era (1939 to 1975), bullfighting (along with flamenco dancing) was supported by the state and promoted as one of the few ?authentic? traditions and identities of Spanish culture. This is a legacy that remains ingrained in the country to this day.

It’s undeniable that many artists, writers, philosophers (Spaniards and non-Spaniards: Goya, Picasso, Monet, Garc?a-Lorca, Hemingway, Ortega y Gasset, Vargas-Llosa, etc.), with immense cultural and sensibility levels, have supported and touted bullfighting over the years. Hemingway wrote: ?Bullfighting is the only art in which the artist is in danger of death and in which the degree of brilliance in the performance is left to the fighter’s honour.?

I have to admit that I, too, have found myself admiring a kind of beauty and nobility in the bull, its ?estampa? (shape), the way it elegantly dances with the torero (bullfighter) on the sand–until the part when the animal is hurt and starts bleeding. The compassion I feel for the animal?s suffering is much larger than the beauty I admire. 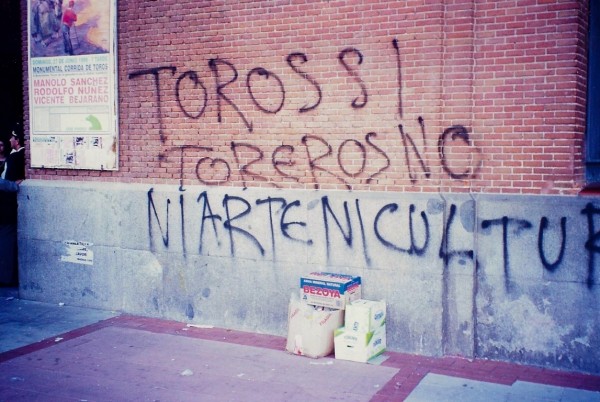 Bullfighting has been decreasing in importance and popularity over the course of the last few decades in Spain (recent polls show only about 19 per cent of Spaniards actively support bullfighting), and it’s even forbidden in some regions–banned in the Canary Islands and until recently, the Catalonia (a court overruled the northeastern region’s 2010 ban last October, calling bullfighting a cultural asset protected under the law). ?In 2015, Madrid scrapped its longstanding subsidy to the oldest of the country’s 52 bullfighting academies, about 100,000 people marched in protest of bullfighting, and the European Parliament voted to prevent EU agricultural subsidies from being used to support Spanish bullfighting. In our 2016 elections, Spain’s animal rights party won a new record of support?285,000 votes (or 1.2 percent of the population)?after pledging to end bullfighting.

Still, I really dont think either the running of the bulls or bullfighting will ever be banned entirely in my lifetime. Even though outrage about animal suffering is completely understandable, and a value and sensibility that is growing even more so in younger generations, there are still very traditional segments of our society and country who maintain that bullfighting is indeed not just an art or a sport– but a right.

Dolores Gonzalez-Posada can be reached at .

One person commented on "Art, Sport or Savagery?"
Feel free to join the conversation and leave a comment as well.