A Casket in Cargo

Grasping Heartbreak of War During Flight Home with Fallen Veteran

I never met him. I don’t even know his name. Or who his family or friends are. But I know who he was.

I was on my final flight home to Chicago from Austin, Texas, where I’d lived off and on for the past five years. He was on that same flight. The plane was running late because of storms up north, but the departure time couldn’t seem to make up its mind. Originally, our flight was supposed to take off at 5:05 p.m. We finally took off about an hour later. Naturally, most of the passengers (myself included) were disgruntled, hot and tired. It was around 100 degrees on this sweltering Texas day. So we boarded, and I thought nothing of it. Just the usual, snarky, how typical of the airline industry.

As I entered the cabin, I noticed two Marines in the front row. Having lived in Texas, the state with the second largest population of military personnel, I’ve seen many people in uniform. Because I was flying on Southwest Airlines and had the silver-medal equivalent of a ticket (a.k.a. Boarding Group B), there were still plenty of empty seats when I boarded. I made my way to the back of plane, and being a picky traveler, I wanted my window seat?one far from a particular child who was fervently kicking invisible targets and would no doubt be karate-chopping the back of some poor soul?s seat on this flight. It wasn’t going to be mine.

I plopped down in an empty aisle near the very back and began dwelling on something truly important?my recently pierced earlobes. I was convinced that the piercings were too low. So, to keep my petulant self occupied, I pulled out my iPhone and started snapping selfies of my ears, looking left, and then right, over and over again. And then I compared my piercings to those of the Duchess of Cambridge. I was turning 30 in a couple days, and the milestone was stressing me out a bit.

After everyone was seated, I could hear the faint sound of the airplane intercom. The voice on the intercom announced that a very special passenger was on board. Great, I thought, some kid has a birthday and we’re going to be stuck singing ?Happy Birthday.?

But the special passenger wasn’t a kid. And there was no celebration. It turned out there weren’t only two Marines on my flight?there were three. The third, however, wasn’t sitting with the rest of us in the cabin. He was in a casket below, in the cargo hold?a fallen Marine. Just like me, he was on a journey home to his family?his final journey. While I would see my family, and his would see him, he would never again see them.

Everyone on the plane applauded upon hearing the announcement. And rightfully so.

I admit, I’ve never handled death very well, and just the thought of it makes me uneasy. The visceral reaction I had to the news was, I’m flying on a plane with a dead person. Of course, corpses are flown in the cargo hold all the time; we just never know or think about it. At least, I don’t. But within a few seconds, a new gut reaction surfaced. I’m flying on a plane with a hero who may have come face-to-face with death on a recurring basis and gave his life so I can live mine. Throughout the flight, I think this Marine’s sacrifice was on the minds of everyone on the plane. How could it not be?

Because of the storms in Chicago, we were flung forward forcefully as we landed. Some people gasped. When the aircraft finally began to slow down, there was loud chatter and some uncomfortable laughter. As the plane reached the gate, the two Marines in the cabin were the first to exit. But they didn’t enter the airport.

Out my window?directly beneath my window?I could see the unloading dock. The two Marines stood?by the entryway as some airport personnel went inside the cargo hold. A few other workers seemed to stand by silently as well. Eventually, a large, vertical, white box slowly came down the conveyor belt. After the Marines removed the white box cover, I saw the casket. The two Marines appeared to secure the lid in place with a belt-like contraption. Then, they began to unfold an American flag, draping it on the casket. When they completed this task, they stepped to the side and saluted their fallen comrade as his casket made its way onto a large vehicle.

After flying for two hours with this fallen Marine, I was once again overcome with the reminders of the sacrifice that so many young men and women make. So I mouthed a silent thank you as I watched the vehicle pull away.

I’m not sure if it was appropriate, but as all this happened, I took a few photographs. Because my phone was low on storage space, I deleted the stupid earlobe selfies and replaced them with memories of the fallen Marine. Photos of a man I?ve never met. A man whose name I’ll probably never know. 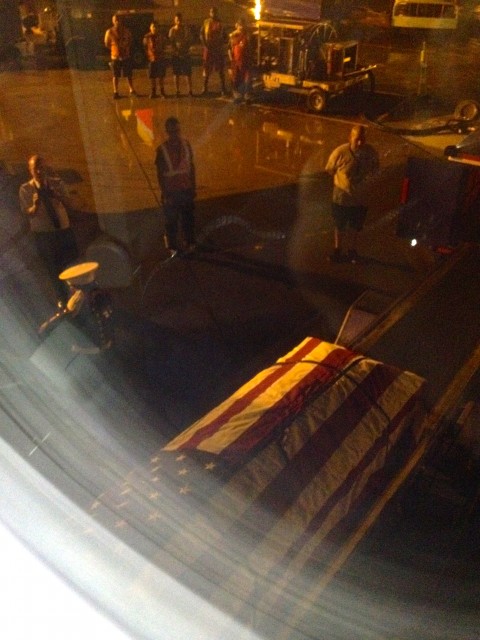 The view from Melissa Suran’s cabin window, after her plane landed in Chicago.

After walking to the front of the cabin, waiting my turn to leave the plane, I asked one of the flight attendants where the Marine had died. She said the crew hadn’t been informed. I told her I was impressed with the way they had shown such respect to this brave man through the announcements they made about him throughout the flight.?His casket may have been stored in the cargo hold, but he was clearly riding in spirit with the rest of us.

As I made my way off the plane and through the airport, I noticed a large group of individuals dressed in white uniforms, with white hats, black scarves,?and military insignia on their sleeves. They were from the Navy. They began to march and sing. A Scottish band also made its way through the airport, and it seemed as if a ceremony was beginning. I asked a TSA agent near me what the occasion was. Veterans were coming home from D.C., he told me, and were being honored with a hero?s welcome.

Some passersby stopped to enjoy this indoor parade. Because I didn’t have any checked luggage, I decided to watch as well. I struck up a brief conversation with one of the spectators?as I informed her about the Marine on my plane, she started to tear up. She said there also had been a fallen?member of the military in her own life. But she knew him.?Really?knew him. He was her friend. He died sometime after 9/11. “I don’t even know why I’m crying to a stranger, he’s been dead for so many years,” she said. I told her not to apologize, and to take comfort in knowing that he, too, must have received a hero’s welcome. She then reminded me how the government treats so many veterans very poorly when they return home. “And look at them,” she said, trying not to let her voice crack. “They’re so young.”

It dawned on me how many of those men and women, dressed in the purest of whites, were probably younger than me. I thought about how some of them, in the course of future duty, might face combat, and might lose their lives. Suddenly, celebrating my 30th birthday took on far more significance.

As I walked to the airport exit, I passed a group of motorcycle-aficionado veterans who were there to honor their returning comrades as well. And all the baggage carousels were surrounded by people, young and old, waving American flags and holding signs. One read, “Welcome home, Daddy!” I wondered if the fallen Marine from my flight had any children, whether they too were at the airport to greet him and take him home.

My own father was waiting for me outside. I wrapped my arms around him and began to cry. I told him what I’d heard and seen that night and how lucky I was to have my daddy here to greet me happily at the airport. Once in the car, I suggested we stop at my grandparents’ house, where I hugged my grandfather?my Poppy?a veteran who was part of military intelligence during the Korean War. I thought of all the grandchildren who would never get the chance to hug their Poppies ever again. And I thought of all the Poppies who died before they could experience the joy of grandchildren.

Many of us are desensitized to war. Yes, we?ve seen the imagery of battlefields. Of mothers clutching the bloodied corpses of their casualty children. Of veterans with missing limbs reuniting with their loved ones. Of families running with outstretched arms, their smiles spreading ear to ear, their cheeks drenched in tears. We’ve all seen those pictures. But few of us have ever experienced it. We’ve never’seen?war. Really, truly,?seen?war. Despite what I’d experienced on my flight, I still hadn’t. And?for the first time in a long time, I realized it.

Melissa Suran can be reached at?.

4 people commented on "A Casket in Cargo"
Feel free to join the conversation and leave a comment as well.