The Girl in the Picture

Happy because the war had ended less than 24 hours earlier and that meant no one would die today.

The three, a young boy in a Boy Scout uniform, a pretty girl in a striped dress, and an American GI wearing an expression of exhaustion, relief and happiness.

The GI is the one who touches my heart because it’s my dad, Paul Huffman. He was a 19-year-old tank driver in the Fourth Armored Division. Landing in France after the D-Day invasion, he fought his way through the Battle of the Bulge, across Europe, and was in the small town of Blatn? ? then Czechoslovakia ? the day the war ended.

I never knew the young man in the picture. He had an impressive mop of red hair, was kind of skinny, and had no clue what life would hold for him over the next 50 years. The man I grew up with was almost always tired from working too much but usually found time to play catch when I was a kid.

Growing up, I came across this photo several times and asked my father about it. It was never clear who took it or how it came to be in my dad?s possession. Despite the presence of the unknown scout in the picture, it was the young woman who intrigued me most. I asked my dad for her name but, like most other details of the war, the memory had faded as his hair thinned. Nudges and winks that maybe she was a girlfriend were always shut down.

Dad was always more interested in reminiscing about the Blatn? villagers who treated the American soldiers as heroic liberators. When he died in 1987 I assumed any chance of finding the mystery girl was gone as well.

With a loving kick in the pants from a Slovak friend, herself a war baby, I started looking again recently. An email to the Czech ambassador in Washington led to Blatn??s mayor, Kate?ina Male?kov?, which led to a feature story in the local newspaper.

Seven plus decades after the war ended I assumed that was that. The woman was likely gone but the article and the photo gave me a chance to tell dad?s story and how he always remembered Blatn?.

A few weeks later, Mayor Male?kov? sent the email that had me blinking in disbelief.? ?We found the lady,? she wrote. ?She’s 92 and doing well.?

After 73 years, the mystery was over. Her name is Bla?ena Hrab?tov?, a retired shoemaker. After the war ended, just like my dad, she married, had two children, and got on with her life.

Then came the next surprise: Bla?ena wanted to meet me. So?did the mayor, who invited my wife Carol and I to represent my dad at the town’s annual Liberation Day ceremonies marking the end of the war.

And so we went, to this small community in the South Bohemian region of what’s now called the Czech Republic. The lovely grandmother who opened the door had a beautiful smile. We stared at each other not knowing if we should hug or shake hands. We hugged.

The living room in her apartment was crowded that sunny Sunday afternoon. Bla?ena and I sat together at one end. My wife, an interpreter, and the mayor in the middle. Bla?ena?s daughter and her husband at the other end. She began to tell stories about the first Liberation Day back in 1945. It was like watching multiple layers of curtains opening for the first time.

Bla?ena brought out some wartime pictures not even her daughter had seen. The memories started to flow. She kept patting my hand, as she looked back 73 years into the past. It was amazing to be sitting with the woman who had?met?my dad, albeit briefly, once the shooting stopped.

Most of her memories of 1945 are soft. Bla?ena said she was friends with the scout in the picture. She said his name is Ladislav Vesely, and that he left with the American troops and immigrated to the states.

She didn’t specifically remember my dad, mainly just the kindness of the American soldiers that day as she and Ladislav gleefully ran around town posing for photos with them.?Bla?ena’s mother?washed uniforms and the soldiers paid her with what were then unimaginable riches of coffee, chocolate, and a canned ham. 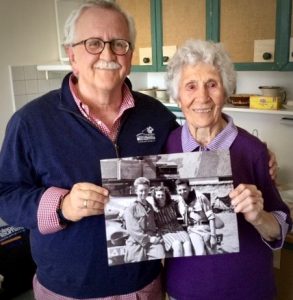 Jerry Huffman poses with the “girl in the picture,” Bla?ena Hrab?tov?, 73 years after his father posed with her. (Photo credit: Carol Larson)?

After years of living through a Nazi occupation, a time when people were always hungry and neighbors were murdered on a whim, even a hint of human decency must have been glorious.

We came to realize that Bla?ena?s family wasn’t the only one sharing stories. While we were there, a local historian organized an event for the entire town. Elders sat in a community center looking at photographs taken during the liberation. The historian had the photos, but no answers, as to who was in them.

?That’s my sister,? one woman called out. Others brought out autograph books kept since childhood and shared the heartfelt messages written by American soldiers to the children who had become their adopted families.

Roses are red, violets are blue

I’ll be far away but always thinking?

The Czechs may have been liberated by the Americans, but were ultimately abandoned behind the Iron Curtain in the name of peace. A stony silence became the new normal in life. The Russians forbade any mention of the Americans and the role they played in prosecuting the war. Mother Russia was the sole north star of their new reality until the collapse of Communism.

On this Liberation Day, it was hard not to get caught up in the emotions as Carol and I walked alongside their parade. The mayor was there, as was a military attache from the American embassy, re-enactors dressed in WWII uniforms, and a few hundred local folks. We walked as a community to lay a wreath at Kalina?s Square, a monument honoring the dead.

It also hit me that I was walking the same streets my dad had walked during the actual liberation. He had survived a war and was blessed to find people like Bla?ena, whose photo gave him a memory that lasted a lifetime. Because of my dad, Blatn? embraced us as part of its own story ? a story that will grow as Bla?ena and the others reclaim their history.

?This is probably the proudest day of my life,? I said, blinking back my own tears. Asked to say a few words on behalf of my dad, I finally got to thank the people of Blatn? for opening their hearts and homes to not only him, but to all of the American soldiers.

I had a hard time looking toward the re-enactors. One young ?soldier,? a skinny kid with a big mop of red hair was there. Leaning against a jeep, he looked tired but smiled at me. He was still 19. Seventy-three years later, the soul of Corporal Paul Huffman was back in Blatn?. And he was happy.

Jerry Huffman can be reached at .

No one has commented on "The Girl in the Picture"
Feel free to join the conversation and leave a comment as well.